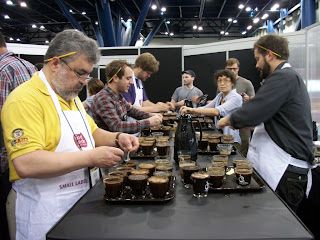 May 1: This was the big day - Artisan Coffee Imports first cupping at an SCAA event took place starting 9:15am. About 15 cuppers came! I was worried a Sunday morning event would be too tough for anyone to get to. The amount of prep work was more than I anticipated, so many thanks go to Jose Ramirez of Farmer Brothers and Robert Athay of Theta Ridge for their help and support.

The cupping featured 9 decaf coffees, two of which were on sale by Artisan Coffee Imports:
The other coffees on the table were: 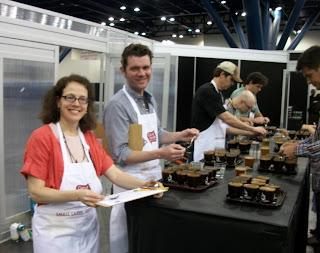 Guest cupper, Ben Kaminsky of Ritual Roasters, cupped our triangulations -- he correctly picked out the decaf 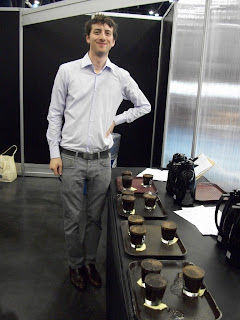 3 out of 4 times! The trays were Kenyans, Colombians, Perus and Sumatras. The Sumatra was the one he missed. He said the Kenyan was the next one where it was almost too close to tell.

Near the end of the cupping, Justin Archer of Ecom/Sangana/SMS gave some comments on the challenges farmers are facing in Kenya. Frederick Kariithi, Chairman of the Rung'eto Coop in the Kirinyanga region of Kenya, also added some insights. They mentioned the struggle in Kenya to raise production which has fallen steeply in the last decade. Kenya used to produce 120,000 metric tonnes, and last year was down to only 35,000 -- next year 2011/2012, might get back to 50,000 m. tonnes. Poor weather, climate change and aging farmers are a few of the culprits mentioned.
Posted by ruth.church at 2:10 PM