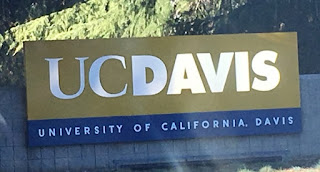 Last week I had the pleasure of taking a tour of the University of California at Davis with other board members of the International Women's Coffee Alliance. Six board members were hosted by Dr. Bill Ristenpart, Director of the UC Davis Coffee Center and an endowed professor of chemical engineering, and Sarah Hodge, assistant director of development for the college of engineering.

We started at the large, modern and impressive Robert Mondavi Institute (RMI) for Wine and Food Science. The RMI was designed primarily to support crops and foods grown in California, thus coffee was always left out -- until now. It started in 2013 with 18 undergrad students who signed up for Prof. Bill's first chemical engineering lab called "Design of Coffee." One textbook, one large donation from Chevron and four years later, there are 1,500 undergraduates who go through one of the three sessions of this course every year.  Along the way, Dr. Ristenpart and his colleague, Dr. Tonya Kuhl, have found much enthusiasm throughout California's coffee industry as well as unmet research needs. 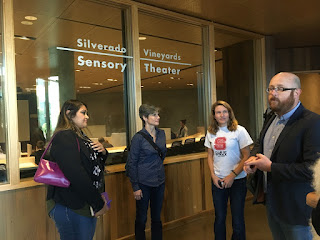 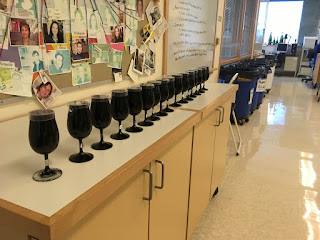 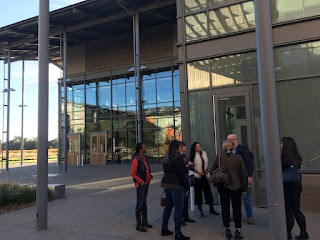 For example, a filter company has hired the UC Davis "coffee team" to do a scientific study of the taste differences between coffee brewed using conical vs. flat-bottomed filters. Actually controlling all of the variables to isolate changes in taste due to the filter shape is an incredible job, we found out! A post-doc is spending his days training the recruited tasting volunteers, practicing how he will serve the volunteers the same coffee at the same temperature, brewed in equipment the same in almost every way except the filter.

We were also taken to what will one day be a stand-alone building for the UC Davis coffee center, just as there is a wine and food science building. The coffee building is smaller, but is a beautiful location just the same. Already, there are rooms sponsored by Peet's, Curtis and the Nicaraguan Coffee group. There are large roasters still in crates donated by Probat.


Having just completed my master's degree in coffee value chains at Michigan State University (MSU), I quizzed the chemical engineering professor pretty hard about how well UC Davis could address the socio-economic research issues related to coffee. He indicated they would attempt to fill that part of the research agenda also, but it's pretty clear that is not the strong-point of UC Davis. They are well-suited to provide tasting/sensory, brewing and roasting research. Most likely, Texas A&M will remain the go-to university for coffee bio-agronomy, and most likely, MSU will remain the premier institution for studying agricultural extension and agricultural economics of the coffee value chain. Sustainable livelihoods, equity and food security are all areas of excellence at MSU with dozen of faculty working in developing countries across the globe. Given MSU's Center for Gender in the Global Context and its ranking as the #1 packaging school, it would be an easy link to include gender studies and coffee packaging science in some future "Coffee Research Center" in East Lansing! Hmm, have to keep these ideas brewing.

Meanwhile, hats off to UC Davis for showing the way and leading the charge to better coffee science!


Posted by Ruth Ann Church at 1:00 PM No comments:

Dec. 1, 2017
One of the best parts of my job is the opportunity to visit cafes and roasting plants across the country. Today was the culmination of two days in Sacramento, CA. I have not really visited Sacramento before, but it is a cool town with a "chill" vibe. The tree-lined streets, majestic old homes with porches and gates reminds me of the old south, except Sacramento in late November has lower temperatures. It was a pleasant 55-60 degrees. In a cafe, I overheard two owners of yoga studios discussing business. Even the Uber drivers are relaxed and cheerful, telling stories in foreign accents of how they arrived in Sacramento from the UK or New York City over 10 years ago -- and never left. It's that kind of place.

They have good coffee, too! I stumbled into "The Mill" one morning which typified the sweet, peaceful atmosphere of the city. They were serving up Heart coffee roasted in Portland, OR.
Next morning I was able to check out the "Weatherspoon Cafe", which has the look and feel of a hobbit-hole, for those who know and love the J.R.R. Tolkein stories. The fact that they serve coffee here from Sacramento's "Old Soul" coffee roasters seems so perfectly fitting.
A "destination" cafe for me was Chocolate Fish on Folsom. I think I first heard this crazy name for a coffee shop five years ago and I've been wanting to visit ever since. The owners, Edie and Andrew Baker, decided on the name because of their affinity for all things from New Zealand - including the "lucky" chocolate fish candy that is popular there. The store offers a beautiful setting for their Dietrich roaster and large wrap-around espresso bar. Everything speaks of excellence and quality.

A second destination cafe for me was Temple Coffee. I was able to visit two locations. The cafe at 21st and K and the roasting plant and cafe on S Street. The roasting plant is amply out-fitted with a training room and warehouse for some of their coffee. Eton Tsuno, Director of Coffee, tells me they store much of their green coffee in a different location outside of the high-rent downtown area. There is a 60kg roaster in a wooden crate, waiting to make it's debut. Meanwhile, the company runs it's smaller roaster, located in the back of the cafe on S street, six days a week to keep up with demand.

Since I was in town for the International Women's Coffee Alliance board meeting, I was especially impressed to see Temple sells water bottles that support IWCA and for the occasion of our visit, small packets of Panama geisha from Finca Hartman with special IWCA labels.

Thank you Temple Coffee for your support of the International Women's Coffee Alliance (IWCA).


Posted by Ruth Ann Church at 7:02 PM No comments: