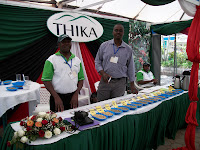 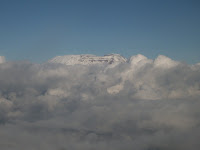 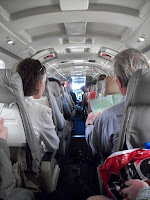 re checking in our luggage. She's a Nairobi native who had just been to a wedding in Tanzania. We talked, got on the plane together and as we did, discovered that she lives in the same neighborhood as the Methodist Guest House where I was going to stay! I invited her to ride with the driver that would be picking me up and she agreed. She canceled her driver. Attached is the best shot I could get of Kilimanjaro. I was sitting next to 2 young British women on the plane who and just climbed it and were cursing it. There had been early and heavy snows, which made the climb very cold, very tiresome (trudging through deep snow) and almost impossible. There's also a shot of the inside of the small airplane. Cozy, eh?
Posted by ruth.church at 12:16 PM 2 comments: 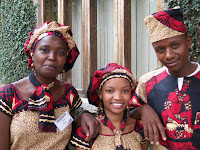 Friday, Feb. 18, 2011
Met interesting folks on the shuttle bus from Arusha town to the hotel where the conference is -- Europeans from the 4C program, the Neumann Stiftung and a Canadian from FAST. The 4C program can be described as "UTZ light". A few years ago, some private companies (including big ones like Nestle and Tchibo), some producers and some funding organizations got together to create a standard of "the basics" for sustainability, fair working conditions and good business practices. The 4C enables producers who are doing a good job (but not yet good enough to get certified) to still differentiate themselves from producers who are using good practices.

The morning session on women in coffee was great. First August Burns from Grounds for Health talked about their recent successes. While I've always thought Grounds for Health was good, I was skeptical because the focus on cervical cancer seemed so narrow -- limited even. After August's talk, I understood better! They are saving women's lives and will reduce the rate of cervical cancer by 30% in the communities where they work. The finale was a great video prepared by IWCA with Burundi women farmers sharing their stories. Very inspiring. Phyllis Johnson's presentation about IWCA used an African proverb as a theme, "if you want to go fast, travel alone; if you want to go far, travel together." 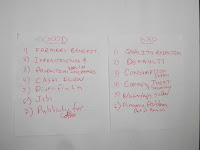 r Bad?". How's that for a topic? It drew 8 or 10 tables of 6 each and the session was moderated by Bruce Mullins of Coffee Bean International. The photo shows the list of "goods" and "bads" that was finally distilled out of each small groups' discussions.

The next event was the coffee farm visit. I went on the bus with 20 others to Two Bridges Estate, which was over an hour's drive away, on the other side of Mt. Meru. This was advertised as a "high tech" farm and it was. They have two center pivot irrigation machines on th 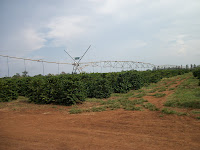 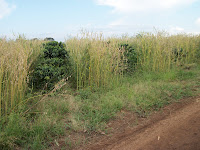 ir large, flat fields with no trees. These make up the "low" farm. Two other farms belong to the same owner, but they are higher up, on slopes and they have shade. The farm also is implementing an innovative inter-cropping method with a plant called sun-hemp. Sun hemp is totally worthless as a grain ("even cows won't eat it" we were told). So it doesn't get stolen, and it's allowed to grow to about 4 ft. tall, then it's felled to just lay on the ground and accomplish 3 things: retain moisture in the soil, fix nitrogen in the soil and fight against nemotodes (a pest). 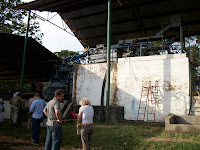 The washing station at Two Bridges was odd because it was 7km away and up a mountain. They have to truck coffee from the lower farm to the station, and then bring it back down again for storage. The station seemed a little old, but they ran the depulper for us with some buckets of cherries. The equipment and set-up seemed to be running great.

I was invited to a dinner by Schluter at a nearby restaurant. Like the night before, tables were actually out in the open, just under a sturdy tent. The food was excellent and two quality awards were presented.
Posted by ruth.church at 9:47 AM No comments: 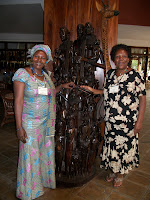 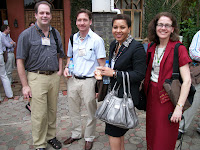 The dinner this evening was also in the open air (under tents) at the Rivertree Hotel. Very enjoyable company, including roasters from 3 continents, farmers, and CQI professionals.
Posted by ruth.church at 11:29 AM 2 comments:

Ah. The single shot of Segafredo espresso is kicking in as I sit on this comfy orange sofa-bench in Schiphol (Amsterdam) airport. No decaf espresso here. I asked.

Flight to Kilimanjaro, Tanzania departs in 2 hrs. Should be a fair crew of coffee folks headed to the EAFCA conference on that flight. Saw Anne Ottaway as I was boarding in Detroit. It's her 3rd trip to Africa this year already!

Flight over was pleasant. Met a charming Irish man living in Bergen, Norway. Cancer researcher. He showed me pictures of the beautiful landscape of fjords and mountains around his home. He's a bike commuter and cross-country skiier, too. Loves Norway. Discussion about Norwegian tax structure and culture was interesting. Would love to go there again. (It was 25 years ago that I backpacked there - yikes!)

Logging out now since it's 3 Euro for 15 mins in expensive Europe.
Posted by ruth.church at 12:10 AM 1 comment:

Can't write much. It takes so long to pack for these trips! "Take 1/2 the clothes and twice the money you think you'll need," is the old adage. I'm trying.

Decided I can't take cupping equipment this time. I'll check out exactly what others bring for grinders and water heaters while I'm there.

The Aeropress is coming with! It will provide the delightful morning cup, I'm sure, for not just me but my teammates while in Meru. Surely at the EAFCA there will plenty of good coffee -- but I'll be very surprised if there's decaf.

Which coffee am I bringing? Kenya AA Meru-Riankune, of course. Regular roasted by Mighty Good and decaf roasted by Metropolis just 2 days ago!
Posted by ruth.church at 8:39 PM No comments:

Getting ready for East Africa

The countdown is on -- 12 days until I depart for Tanzania and Kenya. I'll fly to Tanzania first, for 3 days at the East African Fine Coffee Association (EAFCA) trade show and conference in Arusha. This is supposedly "the place" to meet the East African traders, exporters, growers and everyone interested in East African coffee from around the world. Looking forward to the "coffee safari" that will take us to visit Tanzanian coffee farms and washing stations.

I'll take the short flight from Tanzania's Kilimanjaro airport to Nairobi on Feb. 19th and this will be my first time in Kenya! I'll spend the night at the Methodist Guest House and then the next morning, I get to do a "trek" out of Nairobi and through the bush to the "country", in particular, a town named Meru. Here I'll be meeting up with a group of 17 others from my church. We're a mixed bag group -- 5 teenagers, a physician, a pastor, 2 college professors, a successful IT entrepreneur, an organizational strategy consultant, several retired people and me -- a coffee importer/broker with an international development background. What can we offer to a high school in Meru? I don't honestly know. But I'm told we will learn to think on our feet and it will be appreciated. Watch this space. I plan to blog about it!

During the week in Meru, there's a plan that I'll visit the Riankune cooperative and mill. That will be fantastic if that works out. I would love to meet the growers from who Artisan Coffee Imports has already purchased coffee and establish an on-going relationship. One that is mutually beneficial and lasting.

At the end of the trip, Feb. 28th, I'm looking forward to visiting Dorman's in Nairobi and, you guessed it, another coffee farm. This time one in the Nairobi region.

Trying to figure out what to pack. It has to be very little. I've been warned that the minibuses for the group I'm with in Meru have very little luggage space.
Posted by ruth.church at 6:10 PM No comments: