April 22, 2016
I had the pleasure of being shown three Dorman's washing stations in the Nyamasheke district (Western province) today. Each one taught me new things and overall re-enforced the dedication to excellence that Dormans has for coffee processing. I am so glad that they have brought their decades of coffee processing and marketing skills from elsewhere in East Africa (Kenya and Tanzania) to Rwanda! Artisan Coffee Imports looks forward to working them as a partner at origin to source great-tasting decaffeinated green coffee.

I've thought of three strikingly beautiful things I recognized or learned on this trip.
1. The first and most beautiful was the "musical march to remove mucilage" at Birembo washing station. Play the video below to see & hear!

2. One of the Dorman's staff  pointed out to me at COPROCA how the workers were highly attuned and trained to the weather and everyone knew exactly what to do about 15 minutes before the rain started. The women who were sorting parchment under the shaded roofs all left to go to the tables to help the other workers covering the parchment on tables with vinyl (nylex) tarps. See video below. Notice the yellow-ish parchment is covered first with the black netting that lines the tables (i.e. is under the parchment when it's drying), and then rolls of black, waterproof plastic are unfolded on top.

These two images, the march-to-remove-mucilage and the rush-to-cover-parchment before an approaching downpour, illustrate examples of teamwork at the washing station.

3. Longin, Dorman's Operations and Logistic Manager, helped me notice a lovely phenomena that happened around 3pm when were were at Birembo. When you look closely at the hills surrounding the washing station, you can see at least a dozen people coming towards the coffee station carrying the white bags of cherry on their heads. It's a little like ants carrying a crumb of food to the mouth of an anthill, only somehow more beautiful. You catch glimpses through the greenery of  spots of white slowly descending on paths towards the station. 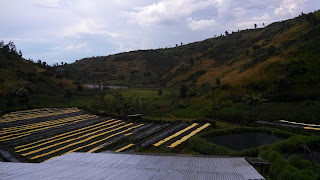 4. A forth item I recognized this day doesn't quality for the "beautiful" list, like the vignettes above. It's just another simple realization for a foreigner like me of what real life is like for a coffee farmer. While we were watching farmers getting their bags of cherry weighed, Harry Bindloss Gibb, the Dorman's intern who helped Longin with the tour, estimated the weight of one of the big bags of cherry a woman had brought in at 40kg (88 lbs). That would mean she got 6,000 Frw (40kg x 150 Frw/kg) which equals US$7.82, for her day of picking and carrying cherry. A pretty small wage for a day of labor on steep slopes with heavy bags.

An average day's wage in rural areas of Rwanda, however, is 1,000 Frw ($1.30). So as a Westerner, I am and should be humbled by how little farmers are paid for their work. But it is also true that relative to their neighbors who do not have coffee trees, coffee farmers are often better off than their non-coffee-farming neighbors.

April 18, 2016
The May issue of Coffee & Cocoa International came out today with our column on the decaf option in Vietnam. (Page 44 - 45.)
My original text (CC&I's editors improved it).

Decaffeination Option in Vietnam
By Ruth Ann Church, Artisan Coffee Imports
Through a chance meeting with Will Frith (www.willfrith.com) at Roasters Guild retreat in August 2015, I learned about a new option in Asia for decaffeination. Thanks to Will’s travels and explorations in coffee in Vietnam, he was able to easily introduce me to a relatively new player in the decaffeination world: Hiang Kie Industries Limited (HKI). HKI began operations in 2007 and was the first decaffeination plant set up in the Long Thanh Industrial Zone in Dong Nai Province, Vietnam, (about an hour drive from Ho Chi Minh City). They process using methylene chloride (MC) for a solvent.
The company runs two decaffeination plants, one can handle smaller batches than the other. They process beans from all coffee regions: South America, Africa and Asia. The minimum batch size is 2.5 MT, or about 5,500 lbs., which is about 42x 60kg bags. What intrigued me about their service is their transparency. With relatively little effort, their sales representative answered my questions about process details and costs. It is a “direct” MC process, meaning the beans soak in the solvent, and then the solvent, with the caffeine, is removed. Of the different MC processes, this one has always been my favorite. It seems the simplest and “cleaner” than the indirect process. It seems to offer the best chance that original coffee bean is left intact as much as possible.
Hiang Kie offers two types of dryers. A drum dryer takes about eight hours to dry the coffee and a vacuum dryer takes about three hours. Total processing time about is about 14 to 16 hours depending on the type of beans.
I was eager, so Dinesh Bhojwani, Hiang Kie’ sales representative, arranged to send me three samples: a Colombian, a Brazilian and a Vietnamese Arabica. All were decaffeinated at Hiang Kie and they all cupped quite well. I admit I was surprised, having lived my entire “coffee life” believing Vietnam can only produce low-quality robustas. The Colombia was my favorite. It retained a lot of its acidity and fruity notes. The Brazil had typical earthiness and body of a Brazil natural. The Vietnamese Arabica had brilliant aroma with sweet cherry and dark chocolate. Admittedly, much of this amazing aroma was tempered in the brewed cup. But this decaf Vietnam still had smooth body and minimal bitterness in the aftertaste. So if you’ve been wondering whether to try decaffeination in Asia, HKI would certainly be worth considering.

Ruth Ann Church is President of Artisan Coffee Imports (www.ArtisanCoffeeImports.com), an importer and trader of specialty green decaffeinated coffee. She can be reached at rachurch@artisancoffeeimports.com. Artisan is now offering consulting at origin for work related to sustainability and impact assessment. Ruth Ann has advanced IDP training and is Q Grader (in the process of re-calibration). She is currently studying for a second master’s degree focused on the coffee value chain and sustainability at Michigan State University. http://artisancoffeeimports.com/about/
Posted by Ruth Ann Church at 3:27 AM No comments: