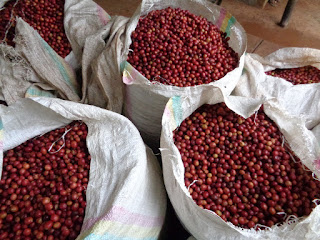 The new wave of roasters want more cost transparency to complement their relationships to the farmers who grow their coffee. That's what we offer at Artisan Coffee Imports in a way that other importers cannot. We offer a closer connection, a deeper relationship through cost transparency, to the coffees we source. (Click here for the last blog describing some of that connection at Kopakama.) Currently we focus on Rwanda, but soon we'll include other origins. As we expand, we plan to replicate the model we've developed in Rwanda:

Farmer Compensation Revisited: This works for the second-payment. The other, more important piece of a farmer's compensation is the first payment -- the payment received for cherry as it's delivered. For example in Rwanda, this base cherry price can range from 150 - 400 Rwf/Kg cherry. A second payment typically ranges from 10 - 35 RWF/Kg cherry. In percentages:

Obviously, the most important piece of a farmer's compensation in Rwanda (and many E. African countries) is the base cherry price. How that cherry price is set is a critical question. Is it based on pure competition for cherry in the market? No, it's usually a mix of government regulations and competitive forces. In cultures with low tolerance and understanding of competition and market economics, the former, (government regulations), tends to be the more dominant determinant of the farmer's cherry price (see paper referenced below). Unfortunately, two major hurdles are frequently encountered in origin countries:
These two factors can both, independently, weaken the government's ability to design and implement effective regulations, even when the government's intentions towards the farming community are positive. A recent paper in the Journal of Rural Studies delves deep into this topic in Rwanda.

The New Wave Roasters: Junior's Roasted Coffee (JRC), Portland, OR, is an example of the trend we anticipate will continue. Daily Coffee News recently wrote about Mike Nelson's multi-year effort to bring deeper understanding of cost transparency to his coffee supply chain.


The picture that became clear to Nelson was that in order for JRC to purchase a grower's coffee at a price that allowed the farm to break even, a significant premium would have to be added to the going market price. "Given the longstanding relationship between the roaster and the producer, and that the coffee consistently cups up to Junior’s stringent standards, JRC was happy to pay more for the benefit of all involved, today and into the future."
“We were able to come up with a premium,” said Nelson. Nelson's importer was paying $3.25/lb. green to the farmer, and Nelson added an additional $.75 per pound green, to ensure break even on his coffee purchase." Thus, the producer in this case is receiving $4 per pound on this coffee. With the premium, the price JRC paid to the importer was $5.62 a pound. "Adding shipping, roast loss, labor, packaging, and everything else, this worked out to be an $8.10 per pound coffee [for Junior’s].”

JRC's roasted coffee (consumer-facing) label says:
"Coffee is traded as a commodity, trading for as low as $1.00/lb during the 2017/2018 season. This season, it cost the [producer name] $2.87/lb [green] to produce this coffee. We paid $4.00 /lb [green] directly to the [producer name] family to cover production costs and to help ensure future production."
JRC is making their support for covering cost of production not only a clear priority of the company, it's seems to be a value. It's a little like telling airline customers exactly how much you, as the airline operator, have included as a carbon credit in the price of the ticket. You're making sure you cover the real costs of production, and you're ensuring sustainability of your industry. [Story credit to Howard Bryman, 10/1/2018, Daily Coffee News, published by Roast Magazine.]


Importer's Role: a final note here about the role of JRC's importer. One might ask why JRC had to go to all this trouble to find out the producer's cost of production? And more trouble to arrange a way to make the producer whole? It appears JRC's importer pays the producer a price that is either at or below the farmer's cost of production. In this happy case, a roaster came along to ensure not only costs are covered, but there is profit for the farmer to reinvest. At Artisan Coffee Imports, we assure all our roaster customers that farmers who grew the coffee we sell are paid a price that covers cost of production and a profit margin. For the base price, (before any second-payment), our minimum is 300 RWF/Kg cherry, well above the average cost of production in Rwanda of 177 RWF/Kg cherry. Not surprisingly, we check the cooperative's records to ensure this price was paid, and 'spot check' with farmers, too.
Welcome to transparently traded coffee!